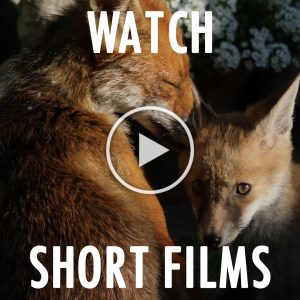 Be More Fox! Make the most of every moment, just like Sandy did relaxing in my garden.

This tribute film for Faith was inspired by a beautiful song renowned folk artist Maggie Duffy wrote for this special vixen.

This was how our founder Dora got foxed. This film won “highly commended” at the British Wildlife Photography Awards 2017.

Catch me if you can

Two juvenile foxes playing tag on freshly laid turf that was “slightly” rearranged by their shenanigans.

What does the fox say?  This film features the most exciting fox vocalizations out of a repertoire of 28 sounds and explains what they mean.

A portrait of beautiful male fox Sandy who spent many months relaxing in Dora’s garden, recovering from multiple leg injuries. His most prized item was a cushion he liked to curl up on.

A creative collage celebrating the beauty of the red fox. Each fox is unique and magnificent in their own way!

A magical fairytale about what life could be like if humans opened their gardens to wildlife and their hearts to foxes.

Lucky to be alive

This is the incredible story of Lucky, a little urban fox that was cruelly maimed by a human and survived against all odds.

Fox cubs enjoying their salad days under the watchful eyes of their mum who knows that fox lives are challenging and sadly often all too short.

Foxes have a big repertoire of sophisticated body language, using postures from canines as well as cats.