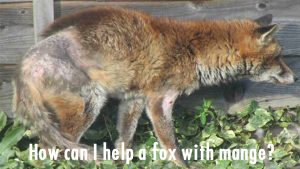 HOW CAN I HELP A FOX WITH MANGE?

Mange is caused by parasitic mites that burrow under the skin and if the fox’s immune system is low, the parasites take over the body. If you spot a fox with mange in your garden you can help this fox by providing food – this is not only important to combat weight loss but also relevant in case the fox is either treated in the wild or trapped to be treated at a rescue centre because the food is the carrier for the medication and is the bait used inside a trap. Also supply fresh drinking water daily as mangy foxes get very thirsty.

To get the help of a wildlife rescue organisation or vet it is important to record some photo or video evidence that can be assessed in order to decide how to best treat the fox.  Note: some foxes with fur loss may not have mange but shed their winter coats. This moulting usually occurs in summer and will happen at different areas all over the body with a layer of the new short coat visible in patches, rather than the skin being exposed and inflamed. Mange can be treated by the same anti-parasite medication given to dogs (medium size 4-10 kilos) such as Nexguard or Bravecto. However in the UK this treatment is by prescription only.  Some anti-parasite medications are safe for lactating vixens others are not, so it is important to get advice from a professional experienced in treating wild foxes. The highly efficient anti-parasite medication can only be given to a fox in the wild safely if you are able to target-feed the fox because if medicated food is left out unattended it may be eaten by other wildlife such as birds and it would be harmful to those animals. If a rescue organisation is satisfied that you are able to target-feed a regular fox visitor who trusts you, they may provide this medication to you, so you can give the ill fox the medication under supervision.

In some severe cases the fox may be trapped so it can be kept warm at a rescue centre where it may be treated with anti-parasite medication as well as antibiotics and the fox will also be fed well to then be re-released into the wild around a fortnight later. However we believe that trapping is a last resort for a life or death scenario as it is extremely stressful for a wild animal to be trapped and handled by humans and the fox may lose their territory if they are gone for too long. Depending on how nervous the animal is, it may take a long time to successfully trap a fox during which time the untreated fox’s condition may deteriorate further. Trapping is also not advised during mating season as the trapped fox may have cubs to support.