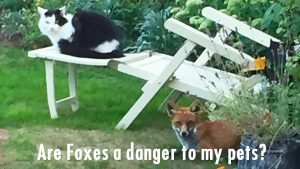 ARE FOXES A DANGER TO MY PETS?

Foxes hunt small animals such as rabbits, mice and rats so if you keep a small furry as a pet outside, it is your responsibility to keep this animal safe and secure from predators. If you have a run, secure it with a layer of string mesh underneath it. If you keep chickens, you also must keep them safe from predators in a fox proof chicken house and enclosure. If given the opportunity foxes may kill more than one chicken, so they can cache them to eat later, especially if there are cubs to feed.  It is an urban myth that foxes “kill for fun”. Some chicken owners told us that they feed foxes with scraps away from their chickens and the foxes don’t make moves on their chickens anymore.

Contrary to urban myths, cats are NOT prey animals for foxes but on par as predators. If you have small kittens, they might be vulnerable to predation by foxes as well as seagulls etc., so do not leave them unsupervised outside. However a fully-grown cat will give a fox a run for their money. Foxes fear the cat’s sharp claws and do not want to risk injury. For more information on cats and foxes, please watch our film ‘Do foxes kill cats?’ in the myth-busting series created with the UK’s leading fox expert, Professor Dawn Scott.