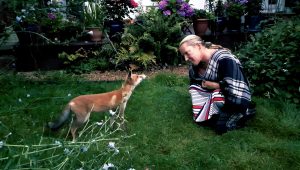 Fox Guardians is a charitable organization that promotes respect and compassion for foxes. Fox Guardians was founded and is run by animal rights activist and filmmaker Dora Nightingale. Dora creates beautiful and educational films about foxes to counter-balance the negative press these much-misunderstood animals get. We also monitor and support vulnerable, ill and injured urban foxes, saving precious fox lives. Our campaigns against fox culls have been featured in the national press and radio. Fox Guardians footage was shown on Channel Five’s programme Fantastic Foxes and many clips have gone viral on social media, reaching so far 200 million views.

Dora Nightingale is an animal rights activist and filmmaker. Ever since two fox cubs chose her urban garden as their playground in the summer of 2016 she has been studying and filming foxes. Her first wildlife film Foxed tells the story of that magical summer when Dora first got foxed.

After the cubs dispersal, Dora continued to monitor and film other foxes visiting in her garden and other locations on a daily basis, gaining a deep understanding of the foxes’ individual characters and social interaction.

Dora realised how challenging and short the lives of urban foxes are and helped many ill and injured foxes whilst they remained wild and free.

In 2019 she set up Fox Guardians to educate people about foxes and inspire more humans to treat foxes with compassion. She successfully ran campaigns to protect fox habitats (change.org/keep-ophelia-safe) and continues to speak up against fox hunting at anti hunt demos and in the press.

Dora cooperated with Professor Dawn Scott, the UK’s leading expert on foxes in creating the Myth-busting film series, busting the most common negative fox myths such as “foxes kill cats”.

Many of Dora’s fox films have gone viral online, racking up millions of views. Her footage has also been featured on TV, most recently on UK station Channel 5’s two part programme “Fantastic Foxes” (https://www.channel5.com/show/fantastic-foxes-their-secret-world/).