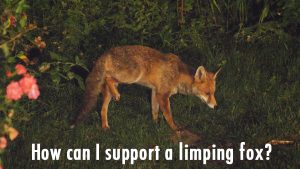 HOW CAN I SUPPORT A LIMPING FOX?

Urban foxes are often lame as they are prone to sprains from jumping over walls. The advice when spotting a lame fox in your garden is to feed as their hunting ability may be compromised.  Monitor the fox for around 5 days by which time the leg has usually healed. You can give Arnica in food which is very beneficial for sprains. This can be ordered online in liquid form from Helios Homeopathic pharmacy and other places.

Take some video footage that shows how the fox is moving. If the fox is at least partially weight-bearing that is usually promising. Look out for open wounds and swelling. Open wounds may get infected and might mean that the fox needs trapping.  Breaks often result that a paw or leg hanging of limply or pointing in an odd direction. If a fox with a fresh break is trapped, it depends on the rescue organisation’s vet how this animal is treated. Foxes are usually not treated like a dog with a broken leg would be treated as the recovery time from surgery would be too long to make a re-release into the wild feasible for the fox. Some vets may amputate and then re-release the three-legged fox back into the wild, especially if there is someone who is able to feed and support the handicapped the fox. Others may euthanize.

An old break may have reset in which case the fox most likely has adapted to this slight disability and lameness. Interestingly a study on Bristol foxes conducted by Professor Stephen Harris, a leading UK fox expert showed that 80% of foxes over 3 years old had a previous break that reset. A fracture of one of the front leg will debilitate a fox more than one of a back leg. Either way their ability to hunt, jump, run and fight may be compromised, so it has to be decided case by case what is best for the fox. Vets do take into consideration if a fox is supported in the wild by a guardian who is able to feed and monitor this fox as this increases the chance for the fox surviving and possibly thriving despite being at a disadvantage.