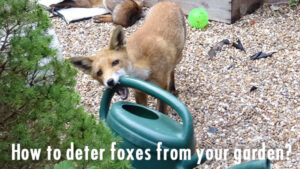 How to deter foxes from your garden

In the UK foxes are indigenous wild animals and have never been legally classified as ‘vermin’. They play an important part of our eco-system and are no threat to humans. If you do not want foxes in your garden, be aware that foxes are protected from cruelty and unlawful killings by the Wild Mammal Protection Act and it is a criminal offence to fill in a live fox earth or poison foxes. A licensed culler could legally shoot foxes on your land (at great expense to you) however this would not solve your fox “problem”. Professor Dawn Scott, the UK’s leading fox expert explains:

“Shooting foxes is not the solution. This is only a short-term  “fix” and other foxes will move in. As they will be setting up territories, it is likely there will actually be more feces as the territory, temporarily vacant is disputed by other foxes.  I would recommend to use humane deterrents on areas they don’t want foxes to defecate in to try to persuade them away. Killing them won’t solve the problem, it will only cause more problems.”

If your garden is a habitat that is enticing to a fox you need to alter and fox-proof this habitat as otherwise other foxes will claim your garden as their territory.  Because more and more green spaces in urban areas are being destroyed, a vacant garden that offers easy access and some cover is irresistible for a fox looking to establish their territory. There are many ways you can deter foxes humanely. You can use a non-lethal and biodegradable scent deterrent such as Scoot to give the fox a nudge to move on. Advice and more permanent fox deterrent services are also available from companies such as Foxagon. A few simple alterations can be very efficient and stop foxes from building a den under your decking etc.

If there is a den in your garden with vulnerable young cubs, on some occasions a vixen will chase predatory pets such as cats and dogs away from her den to protect her cubs. Cats and dogs are both prolific predators that can and will kill fox cubs. Even though normally a fox would fear a dog or cat and give them a wide berth, a mother’s instinct to protect her young will make her more fearless, standing up to predators to keep them at bay. The advice given by Professor Dawn Scott, leading UK expert on foxes is to “not let your pets out unsupervised and keep dogs on a lead”. This may be inconvenient but will avoid conflict or further harm. Let your pets scent mark in the garden, so the vixen is aware of the continuing presence of a predator and may choose to move her vulnerable young to a safer environment. Once the vixen and cubs have moved on, you can take the necessary steps to make the den area inaccessible for future fox families.

Note that the problems you are facing are only temporary. Foxes may dig in your garden to cache food or poo to scent mark their patch. Cubs may chew plants when teething to check what is edible. But when you use a scent deterrent on the lawn or around precious plants these problems should subside. You can also chuck out old socks or rags destined for the bin for the fox cubs to chew instead of plants.

Note: If you normally do not have foxes visit our garden but suddenly see a lot of foxes frequenting your garden in summer time, this does not mean that your garden is “infested” with foxes or you are “overrun” by foxes. In summer adult foxes take their cubs on a tour of the neighbourhood, so it is more common to see multiple foxes at the same time, often during the day. Cubs are less fearful of humans than adults and as they learn to be independent they may be more active, looking for food often during the day.  However the cubs will soon disperse to claim their own territory. Many juvenile foxes get killed when they start exploring – statistically only one out of five cubs will live until their first birthday. So the fox population is self-regulating. Fox lives are tough and short and to a fox it makes all the difference if they find a garden where they are allowed to play or rest up. We are facing a biodiversity crisis, so the more people are willing to share their space with wildlife and treat these animals with compassion, the better for the ecology of the planet. Personally I believe to have foxes frequent my garden it is a wonderful opportunity to learn about these indigenous and iconic animals and I enjoy any sightings and monitoring their lives with a trail camera.