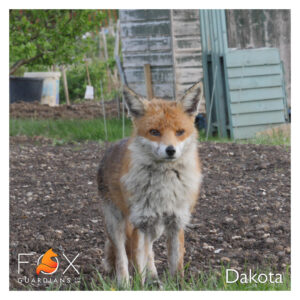 Dakota is one of the vixens that lived at the Rustington Allotments. When we first started to monitor her, she was rearing three juvenile foxes. The Allotments made headlines as sadly they were the location of some gruesome fox killings. Dakota became the poster girl for our campaign requesting CCTV to be installed on the allotments. Even though our petition reached 28.000 signatures, sadly the police and council refused to investigate further or install a surveillance system.

We successfully treated Dakota for mange but we do not know where she is now as she went off the radar only a few weeks after we supported her. We are worried about her as there seems to be some fierce fox haters living in the community that wants to see all foxes gone from the allotments which of course is impossible as allotments make an ideal territory for an urban fox with an abundance of food and areas to lay up in or build a den.