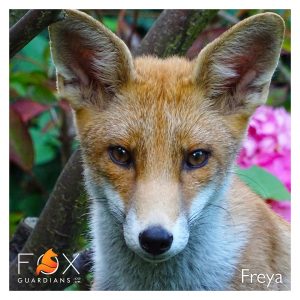 Freya is one of the original foxes that inspired our founder Dora Nightingale to become a fox guardian. Together with his sister Faith he discovered Dora’s garden in the summer of 2016 when both cubs had teamed up to explore the neighbourhood. Freya features in our first foxumentary Foxed and many of our other fox films that have gone viral.  Some of you may have seen the footage of the siblings pouncing on a blue sun lounger whilst he was teaching his sister how to hunt.  He grew into a stunning adult fox who continued to be fiercely protective of his sister Faith. We successfully treated him for mange, lungworm and deep facial lacerations, he obtained from territorial fighting.  After almost 4 years of daily visits he went off the radar in spring 2020.

Watch ‘Foxed’ and ‘The Offspringers’

The story of Freya and Faith – two urban fox cubs who claimed a garden as their playground and got filmmaker and Fox Guardians’ founder Dora Nightingale well and truly foxed.

How our founder Dora Nightingale got foxed. This film won “highly commended” at the British Wildlife Photography Awards 2017.