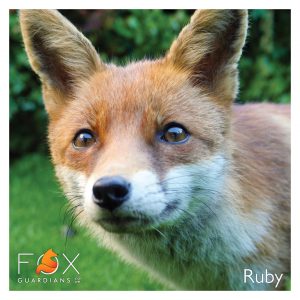 Ruby is a beautiful vixen with sad eyes.  She sought refuge in Dora’s garden in the summer of 2018. Ruby was very frail when she arrived and had mange which we treated successfully. Through social media we found out that Ruby had been made homeless as the garden she used to lay up in had been bulldozed to make room for an extension. She must have been looking a long time for a new safe place as she hardly left Dora’s garden for 3 months. She slept lots in the open dog kennels Dora provides as wildlife shelters in her garden and ate copious amounts, eventually regaining her strength. She used to love following Dora around when she watered the plants. Ruby is the star of our film Ruby And The Roses. Ruby went off the radar in the autumn of 2018.

A portrait of beautiful vixen Ruby who came to Dora’s garden to rest up and recharge.