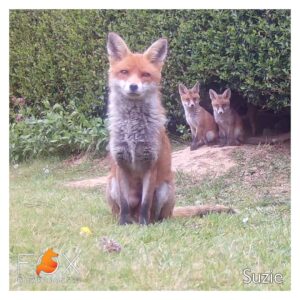 Suzie is an urban vixen that single-handedly reared 4 cubs in an urban garden in Rustington. We discovered her because the concerned garden owner informed us that “a fox has been chasing my cats from the garden”. We were certain that Suzie had built a den in the garden and she was defensive of her vulnerable cubs. We set up a trail camera and sure enough discovered that Suzie had indeed given birth and the cats had been coming right up to the den entrance. A cat is a predator and a young cub being only the size of a guinea pig, can easily predated by a cat. Hence the vixen was chasing the cats off. Foxes and cats are on par as predators and usually give each other a wide berth but the maternal instinct made Suzie act in a more daring way, trying to protect her cubs. The garden owner allowed us to monitor Suzie and her cubs and we captured many touching moments of her caring for her cubs on film.  None of the two cats were ever harmed.