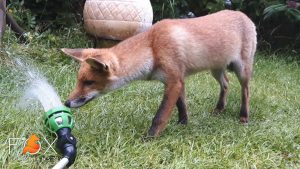 Today is a very special day for me. The 7th of July 2016 is forever etched into my memory; the day I became “Foxed” and my life changed forever. I was watering the lawn that sunny afternoon when a little fox cub appeared as if out of thin air. He was fascinated by the water stream and started to play with it. He was fearless, curious and very cute. I had never been so close to a fox before. Previously I had only spotted fleeting foxes from a great distance at dusk through a pair of binoculars. But this cub looked straight at me with his beautiful amber eyes, a crooked head and his oversized ears that he had yet to grow into. It was a surreal and magical moment.

I thought that this surely must be a one-off amazing experience. But it wasn’t – Freya as he was to be called (because we could not see his boy bits yet) returned the following day bringing his little sister, beautiful Faith, with him. Freya and Faith transformed my garden into their playground. Throughout the summer they returned every day to play and explore. They stayed all day and left after sunset for their nocturnal adventures in the neighbourhood.

I knew nothing about foxes at the time and their beauty, intelligence, boundless energy and happy playfulness captured my heart. I started to schedule my day around being able to watch and film them. I got well and truly foxed. The videos of the cubs’ shenanigans, such as them pouncing on my sun lounger as if it was a trampoline, reached thousands of people online. Little did I know that what started as a fun pastime would soon become my passion and calling and that a few years down the line, I would be a full-time fox guardian who dedicates her life to these beautiful animals.

I realised early on that the salad days do not last forever for young foxes and their lives can be tough and short. When Freya and Faith were only 6 months old both cubs had lungworm and I will always be grateful to the kind human who acted beyond the red tape to get me the right medication quickly, so their little lives could be saved. A very valuable lesson was learnt. The cubs grew into strong juvenile foxes who went off to explore the big wide world in the winter of 2016. I did not see them again for 9 months. By then I had rigged my garden with trail cameras, logging the many comings and goings of the wider fox clan. I gained insights into the secret lives of these foxes, a kind of soap opera that plays out mostly after dark in our urban gardens, hidden from our eyes.  When checking the footage I never knew what I would find: sometimes my heart jumped with joy when I saw two foxes playing and grooming each other; other times my heart bled for a fox that had been injured or was very ill, suffering from mange. I chose not to look the other way and help any fox in need that entered my garden. Many important and sometimes painful lessons were learned about the ethics of wildlife support and rescue.

I continue to learn and find my path as a fox guardian, helping foxes whilst they remain wild and free. To my great surprise and joy, Freya and Faith returned one day after 9 months away and reclaimed the playground of their cubhood into their prime territory as adult foxes. After their return Freya had become elusive and is now frightened of humans, however beautiful Faith recognised and trusted me as if she had never left and for years we spent many hours together under the stars just sitting with each other.  She taught me how to talk fox. Sometimes Faithy greeted me with a nose bump and even curled up right next to me to go to sleep. I never touched, trained or tamed her to do any of this. These were gifts she chose to give me of her own free will and wild heart. Recently Faith then Freya disappeared again and it has now been many months since I have seen either of them. It is the first summer in four years spent without them. I try to remain hopeful that they are still alive and well. They have already beaten all the odds by still being alive as 4 years old foxes when the average life expectancy of urban foxes is only around 18 months.

Many other foxes have touched my life – all of them unique little souls who allowed me to capture treasured moments of their lives on film to share with you. Some foxes walked into my garden in their hour of greatest need. Many tears have been shed for those I could not help or save. But many tears of joy and laughter continue to flow when I am privileged to save a precious fox life whilst they remain wild and free; or when I watch the little tinkers play with each other with no care in the world or groom one another with much tenderness and affection. Now my life is all about foxes; I film foxes, write and post about foxes, campaign and march for foxes, thrive to be a voice for foxes. Through studying the foxes in my garden and on many other locations on a daily basis, I have been able to learn so much about fox behaviour, communication, their social bonds, their illnesses and injuries.

I feel blessed that I have been able to help many foxes in need, and even save some precious lives. It is an honour that some of my fox footage has reached millions of people around the globe and I had the opportunity to fly the flag for foxes in the media, all in the hope to increase respect and compassion for these iconic yet sadly much-misunderstood creatures. Looking back over the last four years that passed since I first got foxed, the overwhelming feeling is that of gratitude. Gratitude for the friendship with wild foxes who chose me as their guardian and also the connections made with fellow fox guardians – many of us doing those little acts of kindness daily that will make a big difference to a wild animal in need. That is all we can do but it is also what we must continue to do in this world that is becoming increasingly challenging for wildlife to live in.

I must say ‘thank you’ to Freya and Faith for teaching me the secret:

“Here is my secret. It is very simple: It is only with the heart that one can see rightly; what is essential is invisible to the eye.”

Finally, a big “Thank you” to all of you who continue to support my work as a fox guardian. I appreciate every like, comment, share and every penny of each donation sent.