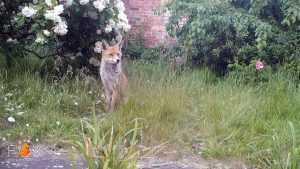 Somewhere beyond right and wrong, there is a garden. I will meet you there. (Rumi)

The vixen was resting in the tall grass soaking up the sunshine. Next to her, Dinky, her smallest cub was mimicking mum’s every move. The warm air was scented with English roses and filled with the birdsong. Bumble bees were drunkenly buzzing by. On this summer’s eve all was well and the foxes had no care in the world. They sat perfectly still, enjoying this peaceful moment of being together. I saw this magic scene unfold on footage recorded by my motion-activated trail camera, allowing me insights into the private life of urban foxes.  The footage made me happy but at the same time very sad. What the vixen and her cubs don’t know is that very soon this secret haven that they have made their home will be turned upside down and at least partially destroyed. The peace and quiet shattered by the cacophony of building work and the tall soft grass replaced with piles of rubble, machinery and fencing. The former Masonic residential home that stands on the grounds will be converted into 19 self-contained flats and a playground will be built in the garden.

The vixen, called Ophelia, had chosen her home well; this secret garden had not been touched by humans in over two years.  The garden has re-wildered and become a peaceful, green and safe foxy retreat in the busy seaside town of Worthing. The mature Sycamore, Evergreen Oak and Lime trees at the back of the garden creates a shaded area and the mound under the mature trees had been converted into a palatial fox den: The perfect place for a vixen to safely birth and rear her young away from their biggest predators – humans.

When I received a tip-off that foxes live on the grounds of the derelict house earmarked for development, I knew that had to visit so I that could monitor them, gather evidence of their existence and do all I can to keep them safe. The iron gates to the grounds had been removed, so I was able to easily gain access, tip-toeing slowly and quietly from the lawned front garden into the mature back garden. It felt as if time stood still in this magic space, with the tall, soft grass a buffer to our busy and noisy urban world. There were so many birds singing from the top of the tall trees and bees were foraging in the meadow and from the bluebells. The sweet scent was intoxicating. And there was Ophelia, the beautiful vixen basking in the sun under a rose bush completely relaxed, her amber coat glistening in the evening sun. She tilted her head back, eyes half-closed with a foxy smile on her face until she spotted me and scurried off down the flattened pathway running through the meadow.

I felt guilty invading her space, as if my human presence had broken a magic spell. But I also felt called to document this fox family’s life on film and to become their voice whilst it was still possible to access the garden. Based on the trail camera footage, I was able to work out when the fox family frequent the garden and their den the most, and avoided those times when resetting the cameras, so they would not feel threatened by me.

I positioned my cameras at different angles of the almost two-acre site to understand as much as possible about how the foxes use the many different areas of this garden. Previously I had filmed urban fox families that made do using the area under decking or a shed as their den. I was delighted to be able to film at a wild fox earth as nature intended and captured footage of Ophelia doing a spring clean of her den, digging debris out of the main entrance to potentially make it wider for her growing cubs. It was magical to see how one cub called another out of the den to come and play. I also discovered that the den is used as a family larder with the vixen and her partner both caching food for the cubs to retrieve and eat later. I feel privileged to get insights into the perfect world Ophelia has created for her cubs, a wild paradise for foxes in the middle of an urban jungle.

The development is starting at a very bad time for this fox family. Even though mum is taking them to explore the surrounding gardens, they always return back to the den. All three of the cubs are still too young to fend for themselves. When the secret garden is hoarded off and the building work commences, the foxes won’t know what has hit them – all of a sudden well-travelled pathways will become inaccessible; noise and dust and dirt will fill the air and the once peaceful space void of people will be teeming with humans. From one day to the next the fox family’s safe space will be invaded and turned upside down.

On behalf of this fox family, I submitted a plea to the council. My aim is to make sure their earth will not be destroyed whilst it is still in use, the foxes won’t be harmed by the ground workers or culled by “pest” control. I cited the “Wild Mammal Protection Act 1996” that makes it and offence to kill wildlife by asphyxiation or crushing (which could be the dire consequence if the den was filled in whilst in use). I also offered to meet the developer and ground workers on site to consult them about the foxes and put notices up on the site informing ground workers about the presence of vulnerable fox cubs. I am still waiting for a reply from the council but have managed to secure a meeting with the project manager of the construction company, Cheesmur Building Contractors to inspect the site and discuss options how to keep the foxes safe during the development.

Many people who care about foxes have asked me: “Why don’t you trap the foxes and release them elsewhere?” The answer is simple: firstly it is illegal to trap healthy wild animals and randomly re-release them. Secondly, it would be extremely cruel for the fox to be handled in this way. Trapping is always a very stressful experience for a wild animal. To release that animal away from their extensive social network, in an unknown environment that will most likely be the territory of another fox, means that the released fox will most likely be attacked and possibly injured by the resident fox that is defending their patch. The result for the relocated fox is the sad life of a so-called “itinerant” fox – a fox that wanders around aimlessly and starving without a set territory of their own; without a place to hunt, eat and rest up safely.

Sadly this development is a done deal and cannot be stopped. And it is a positive that the development by the council will provide temporary accommodation for homeless people rather than holiday homes of city slickers. But I would like to be a tiny grain of sand in the well-oiled machine of urban development, a bit of resistance on behalf of the wildlife that will lose their habitat. They have as much a right to be here as we do.

What we can do for Ophelia, her partner and their cubs is to enable them to have a slow transition, so they can grasp the changes to their environment and move on by themselves when they are ready to.

Once the cubs disperse by the end of the summer, it might be the kindest action to deter Ophelia humanely with scent markers from using the earth next spring to give birth as by then playground build may be in full swing. The ground works could obstruct routes that Ophelia’s helper uses to bring food to her and her cubs and may also make it impossible for Ophelia to relocate her tiny cubs to a different location. So making the den unattractive to her by autumn, will give her time to scout new areas that might be suitable for her to build a den. She needs to find a garden that is not the territory of another fox, has a secluded space suitable for a den where the owner may welcome her family rather than chase them off.  I know of one garden nearby that Ophelia and her cubs visits and where the fox family is welcome. The owner of this garden welcomes and supports the foxes. However this garden may not be suitable for Ophelia to build a new den.

It might take the vixen some time before she finds and claims the perfect spot. Sadly, more and more people sacrifice their gardens to extend their homes or build a car parking space. Some people do not want foxes in their garden. I was called by someone recently who wanted fox cubs removed from her garden because the chew her plants and know of a person who bangs a pot loudly to shoo off fox cubs every time she spots them on the lawn. It is such a shame. To me, a garden is a wonderful window into the wild. Being able to watch foxes sleep, play and quarrel in my garden is enriching my life; with the characteristics of both cats and dogs, foxes are such beautiful and unique animals. I will never forget two fox cubs using my sun lounger as a trampoline, teaching each other how to hunt by one fox mimicking the prey and the other the hunter, pouncing on top. Witnessing scenes like this unfold live in my garden beats watching a glossy nature programme on TV for me.

Foxes are no threat to humans. They want nothing from us but just to be allowed to share some outside spaces and live peacefully alongside us. And that is not much to ask for.

If you support my pleas for the foxes’ safety, please share this blog and sign my Petition to Worthing council